NOAA’s marine forecast was showing light North winds and calm seas on Friday morning.  On the south shore of Long Island, NY, that means its a great time to do a little exploring out on the ocean.  With my small boat, I need to pick my days so I don’t come home black and blue.  More importantly, on those calm days, the visibility over the surface of the ocean greatly increased.  The background pattern is simpler and its easier for your eye to pick out anomalies.  These breaks in the pattern are often just birds or mylar balloons, (#balloonsblow), but occasionally they are something exciting:   dolphin, sharks, turtles, whales, Mola mola ( sunfish).

This trip I found an 8 to 10 foot Smooth Hammerhead, Sphyrna zygaena, who was pretty chill, allowing me to approach and even a little curious to check out the boat.

This is often the first you see of a shark – just a little blip of a fin.  You keep your eyes on it; It could dive out of sight without a moment’s notice. 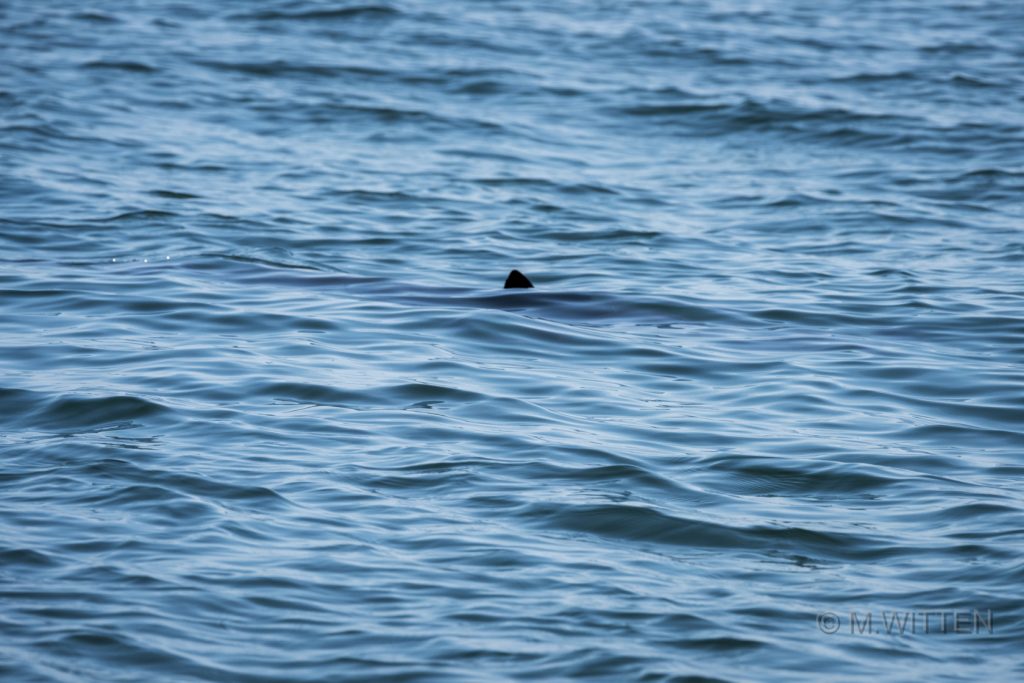 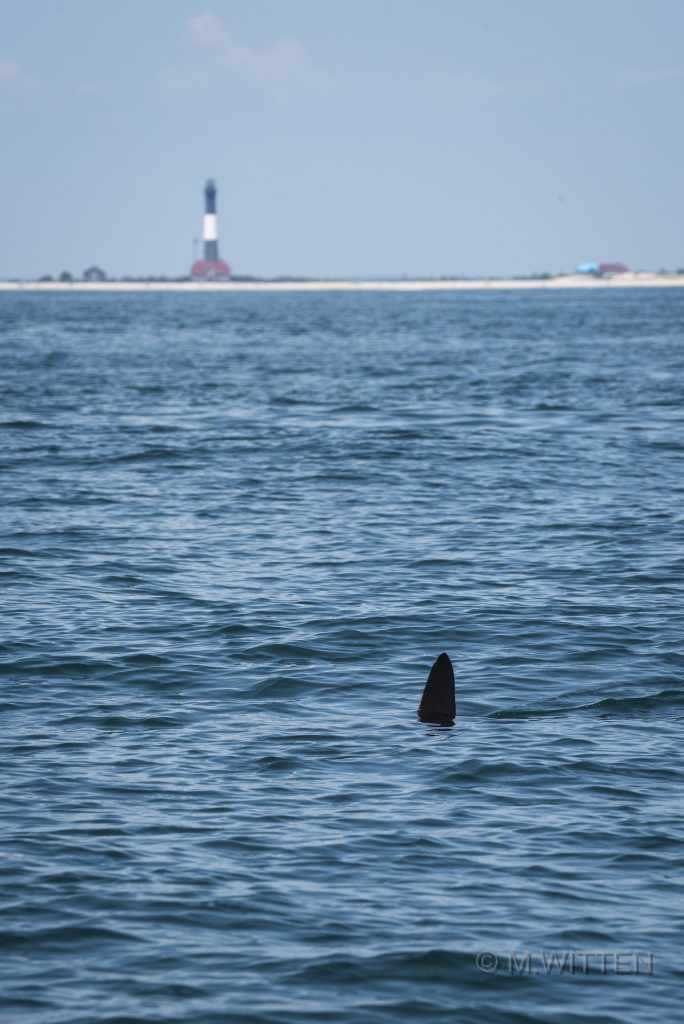 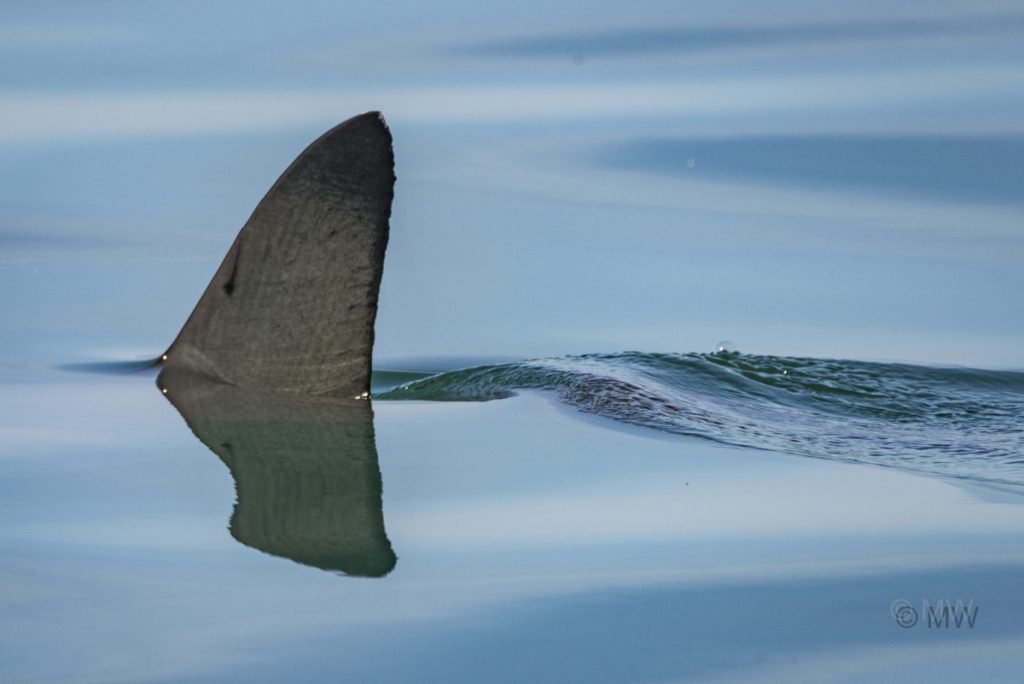 He seemed relaxed, slowly finning on the surface, so I tried to get a bit up-sun of him, while getting the Fire Island Lighthouse as a backdrop.  The long narrow dorsal fin is the first indication that this was a Hammerhead.   Several people online claimed that this was a Mola mola Ocean Sunfish, but a picture, while sometimes being worth a 1,000 words, is still just a static slice of time.   Although they both have large dorsal fins, their swimming behavior could not be more different.   Sunfish are best described as being “floppy”.   Their dorsal fins flop back an forth, lazily.   Their entire bodies flop over sideways as if they are sick or hurt and unable to swim properly.  Floppy.   They’ve been described like this: “They are clumsy swimmers, waggling their large dorsal and anal fins to move and steering with their clavus. Their food of choice is jellyfish, though they will eat small fish and huge amounts of zooplankton and algae as well.”  So they flop and eat small floppy things.  Here is one I found a few miles from the shark.  Jay’s friend thinks this is a baby whale. 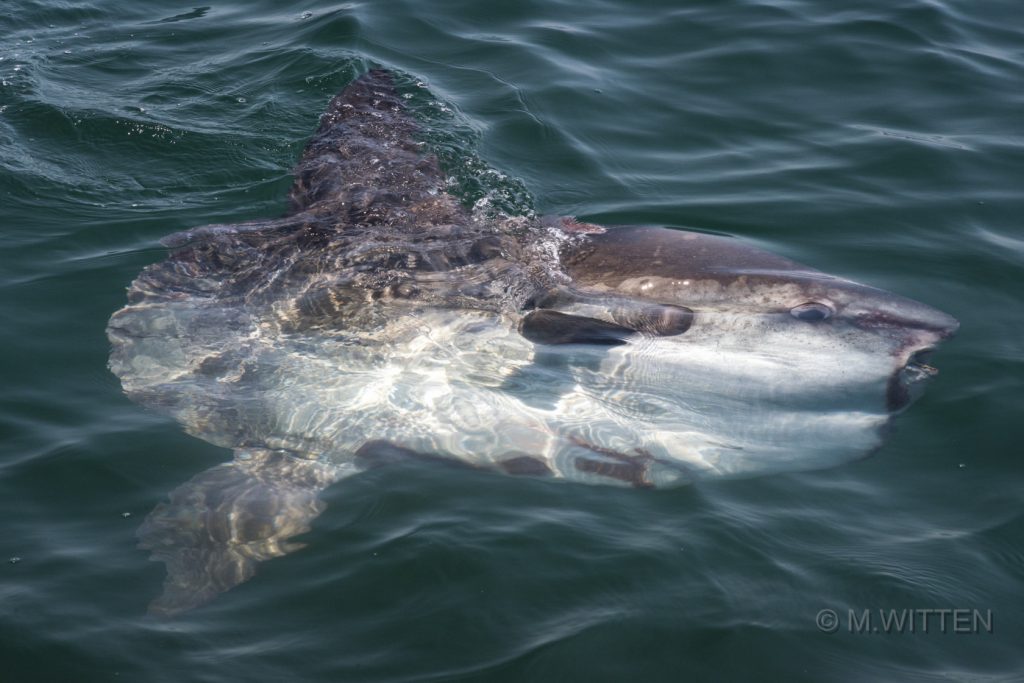 The shark was finning pretty much in one direction, so I approached at idle speed towards where he was heading to basically intercept him.  I got really close and took a few pics. 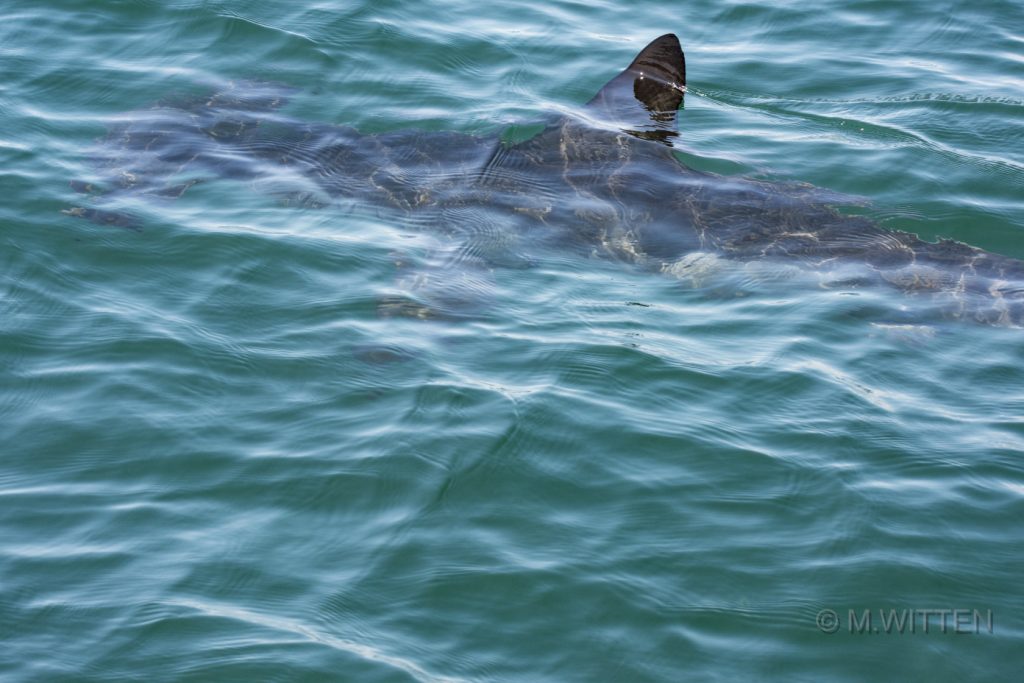 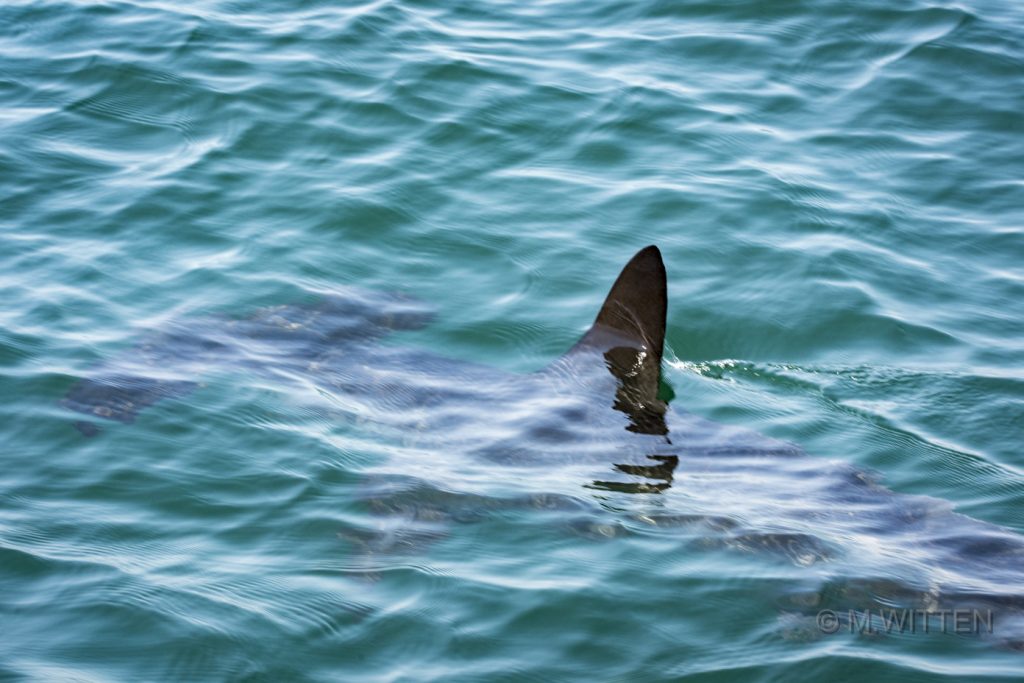 I was very happily surprised by how close I got, so I tried another approach and grabbed my GoPro.

Here you can see that this is a Smooth Hammerhead, not a Scalloped Hammerhead.   The Scalloped has a slight indentation of the very leading point of their head or cephalofoil.  These sharks are predators, feeding on fish.  In accordance with this, their movement is vastly different than the Sunfish’s flop. I have witnessed them feeding on bunker (menhaden) pods.  They can turn incredibly fast, slicing and dicing through a bunker school.  Here is an older shot of one feeding.  He was turning in a very small radius, very quickly. 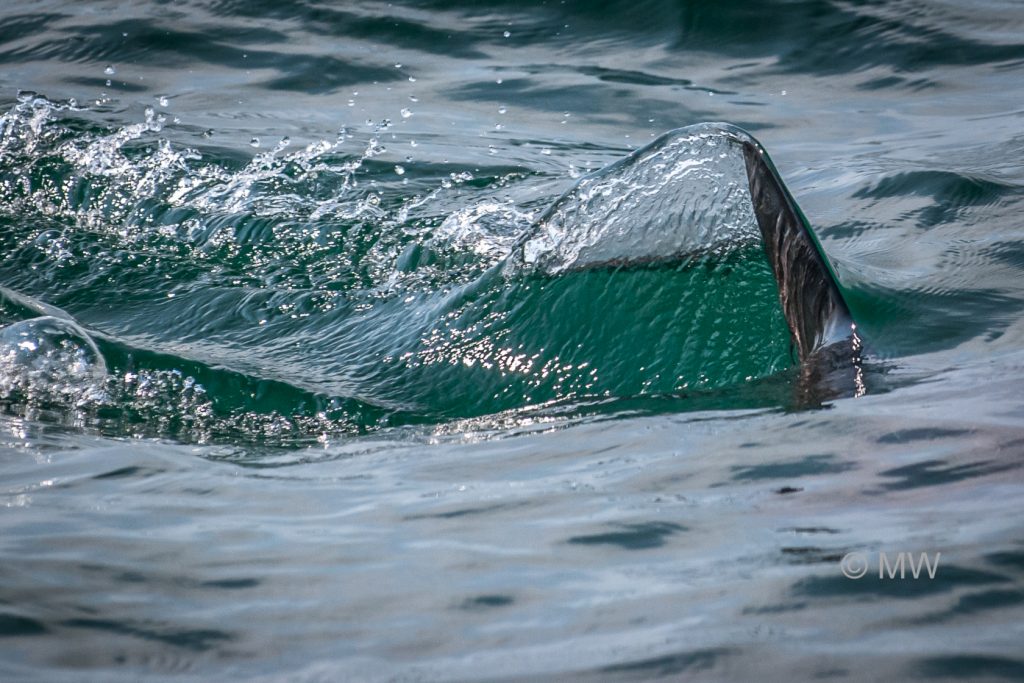 After the GoPro pass, I wanted a few more photographs, but I got too close for my long lens on the next pass.  Just off the bow, he swam through a very still ripple-free section of water, and I was able to see him in all his glory, all 8 to 10 feet of him.  The only picture of that particular sight is burned only into my brain.  I tried for one more pass,  changing frantically to a 24-105mm with a circular polarizer to help cut through the water surface glare.  Polarizing filters are highly recommended.  Driving and positioning the boat while changing lenses was a bit much and I lost track of him.  Gone – just like that.

Smooth Hammerheads migrate North to temperate waters and are seen fairly frequently here in summer.  They school up to migrate, but as adults here, they tend to be solitary.  Solitary blips out of the background.  Keep your eyes out! 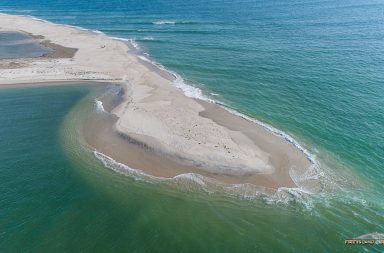