Following the Regatta (which I must hasten to add was preceded 6-8 AM that morning by a righteous clean up of Fox Island off Babylon led by Karen Marvin of South Shore Paddle Boards, also a Board Member), we hosted The Mayor’s Charity Cup Clambake on the beautiful grounds of the Long Island Yacht Club.

York Analytical Laboratories was the Presenting Sponsor. They are a regional environmental testing company that tests for contaminants in air, water and soil such as 1. 4 Dioxane and PFOS and PFAS, which need to be tested at parts per billion and trillion respectively. Present and supporting the event were a number of their Long Island clients, listed as sponsors below.

We also had on hand The Nature Conservancy, which was there largely to educate the public on the I/A OWTS systems (Innovative / Advanced Onsite Wastewater Treatment Systems ) and the opportunity to replace your cesspool with one of these advanced systems via Suffolk County’s Reclaim Our Water initiative. If sailing has been on the decline in The Great South Bay, declining water quality has certainly had something to do with it. Suffolk has over 200,000 systems to replace as part of its strategy to heal our waters. It’s an enormous undertaking that will take decades. First we need to pilot this. How do we prepare for this rollout? How do we optimize these systems? Be a pioneer! Generous grants are available. Ditch the cesspool and help us all by participating in the launch!

Seatuck Environmental Association was also there and present. Currently, they are seeking to aid in the stewardship of West Brook, much of which was ‘revealed’ when the 140-year-old boards damming the brook into a pond (i.e. an impoundment) finally gave way at Bayard Cutting Arboretum, revealing the serpentine channel of the brook beneath. On Wednesday the 25th, they removed some phragmites before it went to seed, having been permitted by New York State’s Department of Environmental Conservation. West Brook now may be the only creek, brook, river, or stream now flowing into the bay unimpeded. There is now at least 20 acres that is ready for reforestation. What the pond had drowned is coming back to life. We just need to let nature take over, providing occasional help when say an invasive needs to be removed or a native-like white cedar needs to be planted.

We stand shoulder to shoulder with Seatuck here. Our Creek Defender Program, like their River Revival Program, advocates for a return of native habitat, including the removal of unnatural manmade barriers — dams, culverts, spillways — that destroy the habitats of creeks, and that therefore impact our bay.

The Gino Macchio Foundation, which has a contraption I call The Oysterator, was on hand as well. It was built to help the casual oyster farmer sort and clean their oysters right at their farms, as The Oysterator is floated to them on a barge.

Now this was The Mayor’s Cup, after all. You can’t have one without a Mayor, and in Ralph Scordino, you have someone who is deeply dedicated to the health of the bay. He understands on a deeply personal level just how important the bay is to Babylon. All along the way, as our organization has grown, Mayor Ralph has stood with us.

He became then the first recipient of The York Analytical Laboratories Stewardship Award, as presented by York CEO Michael Beckerich:

Reflecting back on the day, I am in deep gratitude. The sailors who raised their masts and took and on the bay, the paddleboarders who woke in darkness so that our bay could get a little cleaner, to that 200+ attendees who came out in support, to the LIYC and The SBCC for pitching this in the first place, to those who donated money, time, raffle items, native plants (Thanks Long Island Natives!). Our all-volunteer board — Todd Shaw, Karen Marvin, Mike Busch, Frank Piccininni, Wayne Horsley, Mark Murray — along with the dynamic Robyn Silvestri — pulled off a minor miracle. Our sights are already set on next year. Our overall goal is to resurrect sailing as a youth activity on the bay. The more we connect with the bay, the better its prospects.

Deep gratitude to all who sponsored. Thank you for helping to restore a tradition as we work to revitalize the bay:

Special Thanks to The Seventies Flashback Band for donating a custom guitar for the raffle!

More photos from the Clambake on Pages 4 and 5 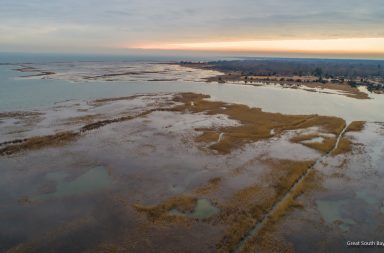