Dr. Charles Flagg of SoMAS was kind enough to share his report and observations of recent changes at Old Inlet.  We have also included some new video and images taken on Sunday, September 22nd to highlight what has changed.  His original report and ongoing research on the breach can be found here.

Those of you have followed these reports may remember that in a February note there was clear evidence from the decrease in salinity at Bellport that the breach was getting smaller. And those conclusions were supported by the series of aerial surveys showing the encroachment westward of the eastern breach shoreline and increased shoaling just north of the breach.

On September 23rd I carried out another of the monthly aerial surveys of the breach area. That flight showed that there have been significant changes in the breach morphology. Of particular note was that the spit extending into the breach from the east for at least the past 9 months had all but completely eroded away, Figure 1. The erosion of the spit had been going on for some time so it is not a complete surprise that it vanished over the past month (see the series of photo mosaics on http://po.msrc.sunysb.edu/GSB/). Of significance is that the disappearance of the spit appears to have been accompanied by erosion of some of the shoals immediately inside the breach and that the channel past the remnants of Pelican Island seems wider and more effective in transmitting waters in and out of the bay than just a month earlier.

So, what caused this change in the breach and has it had any impact on the bay?  Figure 2 shows the record of ocean waves over the past 45 days as well as temperatures and salinities measured at the Bellport dock.  After a fairly calm summer we have had a few vigorous fronts pass through complete with high winds and lightning. The thunderstorm right after Labor Day was locally memorable. And that storm was accompanied by ~3.5 meter (~11.5 ft) significant wave heights at the NDBO buoy 44025 located about 20 miles south of Fire Island Inlet. (Significant wave heights are the average of the 1/3rd highest waves.) Another significant event happened around August 26th and there have been a couple of lesser periods of high waves in September. All these high wave periods could have, and probably did, cause much of the erosion throughout the breach since the previous aerial survey in August.

How did this effect the bay? It is a little speculative at this point but the salinity record is suggestive that there has been an increase in ocean – bay exchange. Early in the life of the breach, salinities at Bellport often reached 30 psu or higher (psu means practical salinity scale and is numerically nearly the same as the classical part per thousand by weight definition). Typical ocean salinities off Long Island are around 32 psu so we were seeing fairly high concentration of ocean waters in the bay. But we have not seen numbers like those for quite some time and typical salinities recently have been in the 26 to 27+ psu range and occasionally much lower after a rainstorm. You can see in Figure 2 that since the high wave events there have been periods with salinities higher than 28 psu and once, nearly 29 psu. These results suggest that there has indeed been increased transmission of ocean waters into the bay. Whether this continues through the coming winter with its increased storminess and continual readjustment of the shoals is yet to be seen. But perhaps the breach is not heading for closure quite so quickly as it seemed earlier in the year.

More Photos taken on Sunday on Pages 2,3, and 4 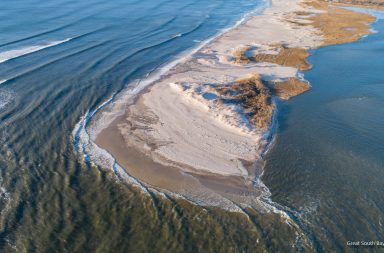