The Belted Kingfisher is a relatively large bird; 11 to 13 inches with a 20-inch wingspan and weighing 5 ounces. It has a large bluish-gray head with a ragged crest and a very large bill. The under-parts are white with a blue-gray band across the chest. The female has rusty colored flanks as well as a rusty band across the chest, making her more colorful than her male counterpart.  (Being one of a handful of birds that shows role reversal, female plumage of this kingfisher is brighter than the male.) Their feet and legs are very small in comparison to their body size, which makes the feet weak and only suitable for perching.

The kingfisher diet is mostly fish but they will eat crayfish, shellfish, small birds, mammals, insects, & lizards. (If these food sources are not available they will eat berries.) They “plunge dive” from as high as 50 feet making a steep head-first dive into the water to catch small fish. Their aim must be perfect, for when they hit the water they do so with closed eyes. They will then fly to a favorite, near-by perch with their prey and beat it to death before tossing it up into the air and swallowing it head first. They will “disgorge” any indigestible bones and scales in pellet form. If you see a dead snag (near water) with pellets at the base and white wash in the area, look around and see if you can spot a kingfisher perch.

The birds have interesting nest sites. They prefer sandy banks of streams or in the roots of overturned trees where they will dig a burrow three to four inches in diameter using their beaks and feet to pull out the sandy soil. The tunnel to the nesting chamber is about three to six feet deep. (Males will often also excavate another burrow near-by to use as a roosting place during the period of incubation. Also, Bank Swallows will sometimes share a kingfisher tunnel by excavating side chambers they will use to nest in.) If the nesting tunnel is a new tunnel the eggs will be laid on the bare ground; however, if the site is from a previous year the eggs will be laid on the fish scales left from the year before. Two to eight white eggs are laid and are then incubated by both parents for 14 to 28 days. The young when hatched are naked and have closed eyes. Both the parents feed regurgitated food to the young which have “sheathed feathers” making the baby birds look like mini porcupines. In 17 or 18 days their feathers appear and they continue to be fed by the parents. Approximately a month after hatching, the young leave the nest and the parent birds begin their fishing lessons by dropping prey into the water for the young birds to retrieve.

It is during this time that another instance of role reversal takes place, for it is the male that spends the most time building the nest, incubating and caring for the young. (Also, in this species, the female is equally as aggressive in defending territory as the male.) After breeding, and the young birds are on their own, the parent birds split up and move to and defend new and separate territories. They may, or may not, re-mate the following year.

Belted Kingfisher populations are widespread – from as far North as the Aleutian Islands, Ontario, and Labrador and throughout the United States. They winter in the West Indies and Panama but if there is open water the males will frequently remain in the summer territories. Populations are widespread, which is surprising due to their very specific habitat requirements: bare, vertical sandbanks, clear water for sighting fish, perching spots overlooking water and nesting area.

So when you are out birding and you hear a distinctive “rattling” call and a large bird flies out over the water, hovers and then plunges head first into the water you’ll know you’ve just seen a Belted Kingfisher. 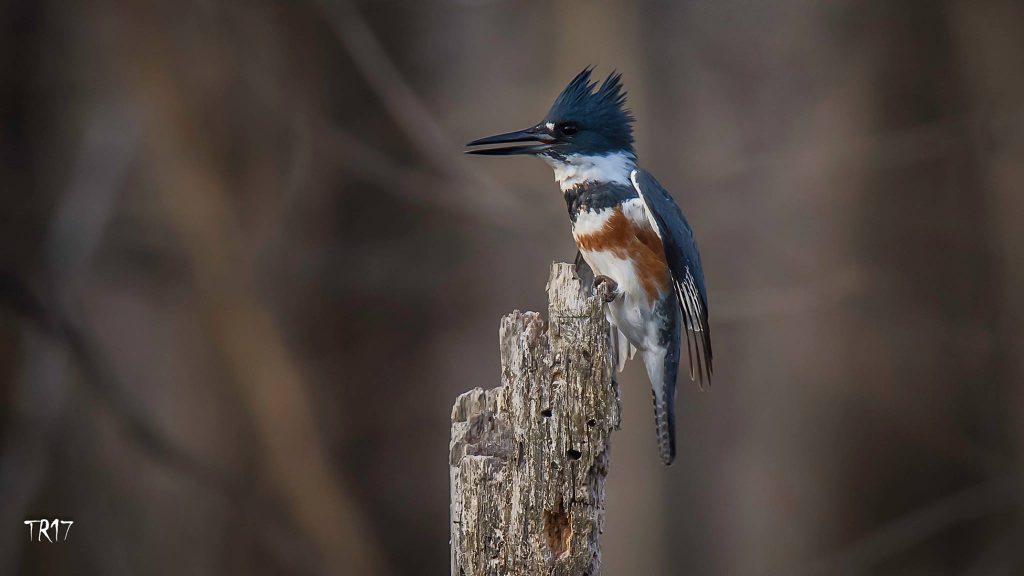 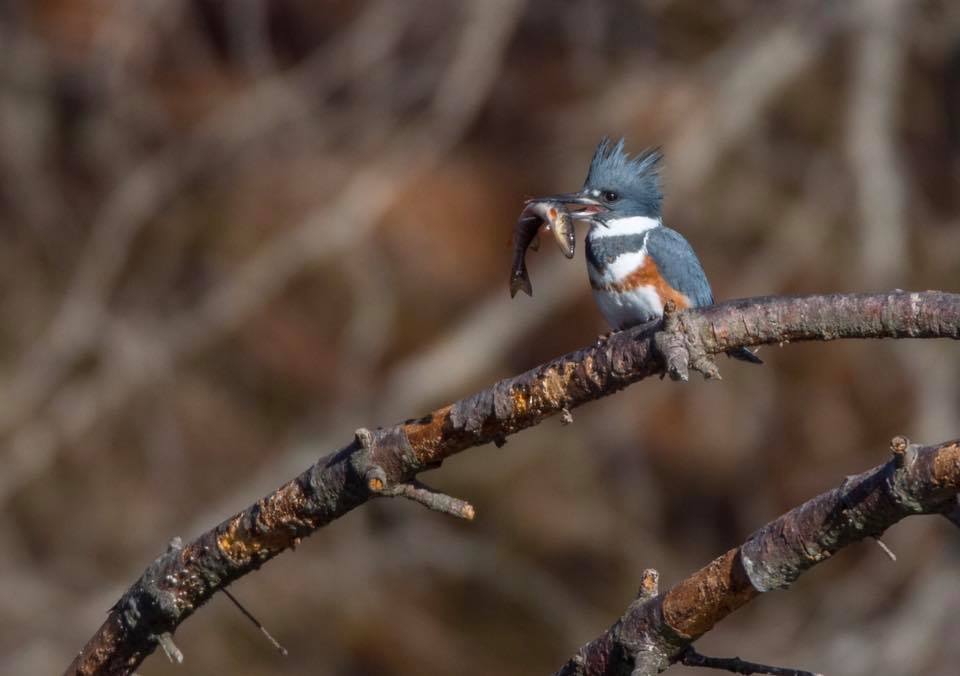 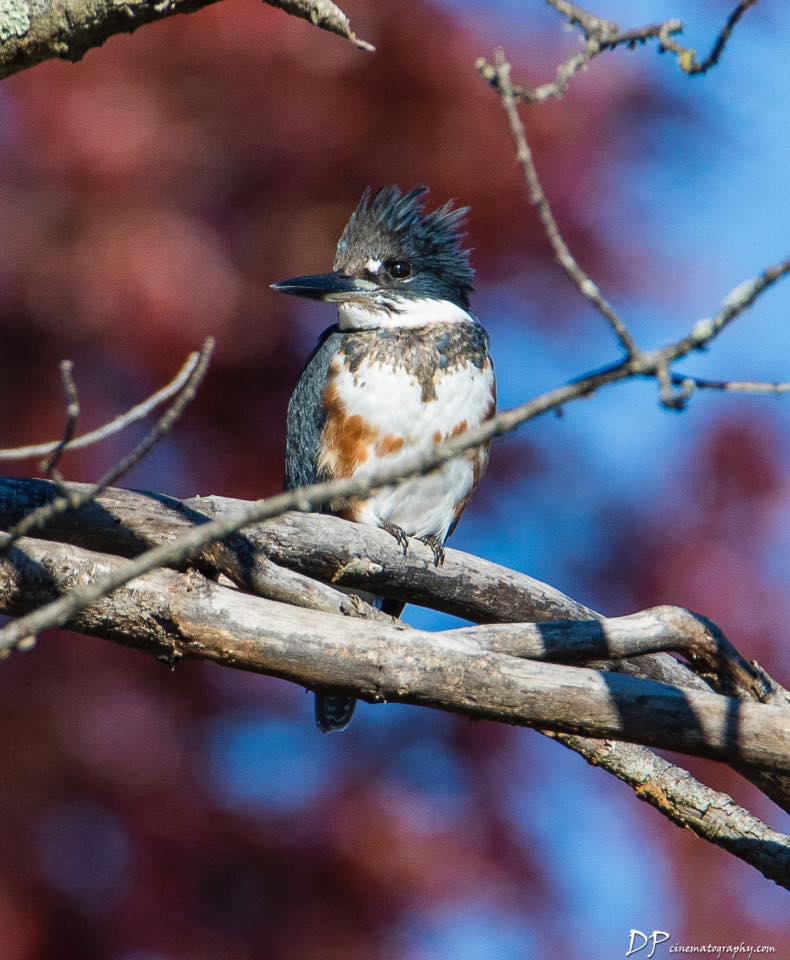 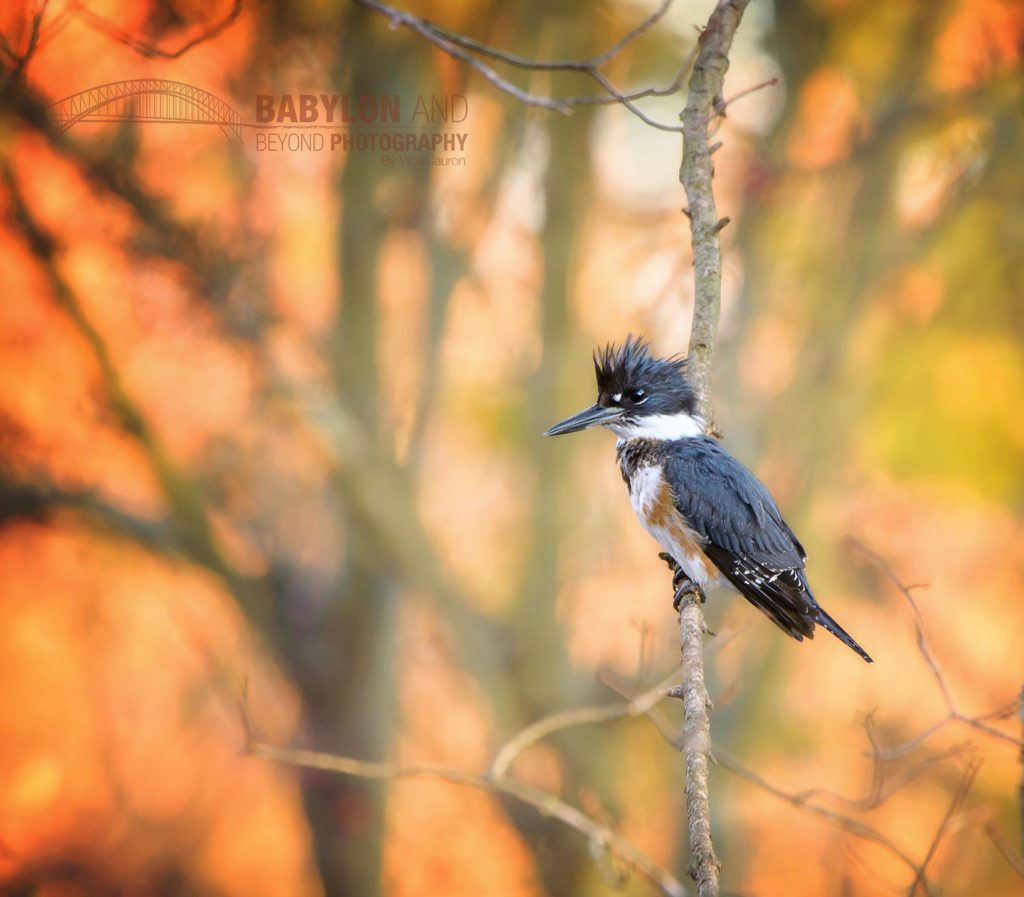 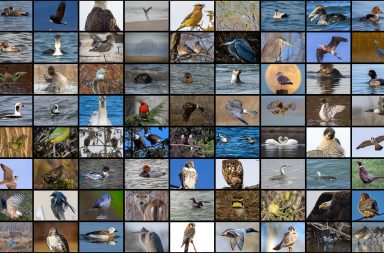